(Report on the National Conference on Constructive Industrial Relations held on 17-18 May 2016, Manila) 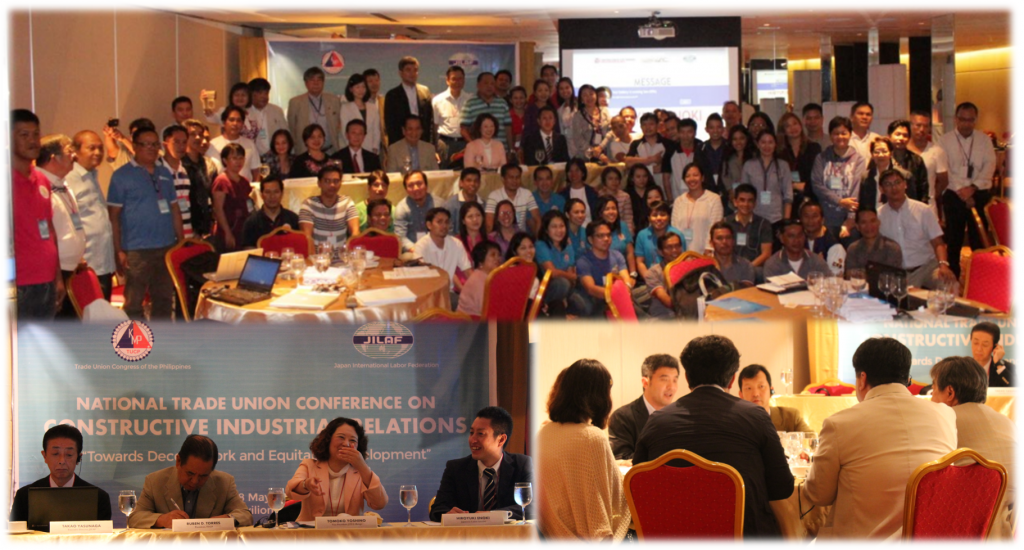 5.18.2016, Manila. –Some 1,000 trade union leaders (41% women) reiterated workers’ call for passage of stronger, better, and workable labor law to ensure security of tenure and constructive industrial relations in the country amidst pervasive use of contractual and precarious employment arrangements.

Workers amplified the call in a two-day national conference on constructive industrial relations, with the theme “Towards Decent Work and Equitable Development” in cooperation with the Japan International Labor Foundation (JILAF) and the Japan Trade Union Confederation (JTUC-RENGO).

At the opening, TUCP President Ruben D. Torres highlighted current challenges in the Philippine labor market, including unemployment and underemployment that is affecting young and women workers, pervasive use of contractual employment relations, and decreasing union membership due to the difficulty in organizing. He noted that the “time-honored morality, tradition, and correctness” of international labor standards, particularly ILO Conventions 87 and 98 suffer from lack of compliance. He expressed hope that the conference will “bring our minds together to better appreciate socio-economic realities, and come up with practical actions to organize and build union power.”

Resource persons from TUCP-affiliated enterprise-based unions highlighted the struggle for union recognition and collective bargaining negotiations. They decried the continuing resistance of many employers to respect workers’ freedom of association and collective bargaining and the apparent lack of positive action by local and national DOLE officials to promote workers’ rights.

Dr. Joseph Jovellanos, president of the Samahang ng Manggagawang Pilipino-National Alliance of Teachers and Office Workers (SMP-NATOW) and Teachers of the Philippines – Public Sector (TOPPS) General Secretary Marvie Michaela Sagun discussed the travails of unions in both private and public academic institutions, particularly in light of the implementation of Kto12 basic education.

Voice in the Call Center (VOICE) President Angelita Senorin, a national union of workers in the call center industry, discussed the results of several studies and actual stories of workers, mostly young people, about the negative impact of night work and stress that workers in the sector are subjected with on a daily basis. Further, VOICE shared the sad fact that, despite sustained efforts, the BPO industry remains union and CBA-free. Project-based tenure, bond, wages, working conditions, high stress levels, cruel work hours, shift-changes, unhealthy work and lifestyle, equal pay for equal amount of work, strict performance metrics, metric of “adherence”, quota for Upselling”, among others are serious workers’ issues in the industry. These and the recurrent disputes between and among workers and their managers have not been of sufficient magnitude to spur a resort to unions. (VOICE and the BPO Workers Association of the Philippines (BWAP) are industry unions doing organizing work in the BPO industry –one of the top key employment generators in the country today. BWAP entered into training and recruitment agreements with certain BPOs, but these have yet to be implemented effectively.)

The conference concluded with the flowing recommendations to promote better and constructive industrial relations: (a) put an end to CONTRACTUAL EMPLOYMENT ARRANGEMENTS by revoking DOLE Department Order 18-A, including those in private and public education institutions; (b) for government to come out with a national policy and programs on transitional of informal to formal employment based on strategies recommended by the ILO; (c) for government and employers to observe the “by-stander rule” in workers’ exercise of the right to join unions and bargain collectively; (d) mandatory and random inspection, especially of hazardous and anti-union workplaces; (e) for K-12: retain transfer teachers & employees, fund assistance for those affected and re-tooling; NOT RETRENCHMENT; (f) more investments for skills upgrading and human resources development, including productivity enhancement and promotion of profit-sharing schemes; (g) more effort and resources for organizing women and youth; (h) government and employer support for union climate change, green jobs & sustainable development programs; and (i) sustain cooperation with JILAF and JTUC-RENGO on capacity-building programs and union organizing, especially in Japanese multinational enterprises in the Philippines.

17 May –
International Day Against
Homophobia, Transphobia
and Biphobia
“This should be observed
every day …”