Court junks motion of Kentex boss to quash case vs him 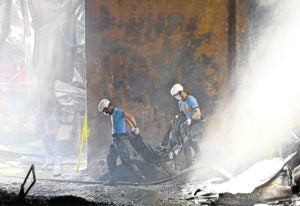 The Sandiganbayan will proceed with the graft and reckless imprudence trial of the general manager of Kentex Manufacturing Corp., which burned down in May 2015, killing 74 people, mostly workers of the slipper factory in Valenzuela City.

It rejected Ong’s argument that he would suffer double jeopardy because he was already being tried for a separate graft case in the Valenzuela City Regional Trial Court Branch 282.

The antigraft court noted that the other case was still pending which meant that double jeopardy could not occur as Ong “has not yet been convicted or acquitted, and that said case has neither been dismissed nor terminated without his

The cases filed by the Ombudsman in the Sandiganbayan involved the issuance by Valenzuela Mayor Rexlon Gatchalian and city licensing officials of a business permit to Kentex in 2015 despite its lack of a fire safety inspection certificate (FSIC).

Gatchalian, as well as licensing officials Renchi May Padayao and Eduardo Carreon, avoided trial after the Sandiganbayan in December 2016 agreed that they were simply following the city ordinance streamlining the issuance of business permits. The court also ruled that the issuance of the permit did not cause the fire.

However, the cases against Ong, as well as city fire marshal Mel Jose Lagan and Senior Insp. Edgrover Oculam, remained pending in the Sandiganbayan.

On the other hand, the charges in the Valenzuela court stemmed from the city fire officials’ issuance of an FSIC to Kentex in 2012 despite its noncompliance with fire code requirements. They were also accused of issuing inaccurate inspection reports in 2014.

The factory fire left 74 people dead and scores other injured with prosecutors saying the victims suffered undue injury in the amount of P3.7 million. The fire also raised the issue of “sweatshop” labor conditions.

Nov 19-25 : Global Warming and
Climate Change Consciousness Week
“Nothing for us in a dead planet.”